JOINT PRESS RELEASE: CIBE, CEFS, COPA-COGECA AND EFFAT STRONGLY WARN THE EUROPEAN COMMISSION TO REJECT ANY ATTEMPT TO INCLUDE SUGAR IN THE REVISED TRADE OFFER TO MERCOSUR

This statement comes as the EU plans to modify its market access offer to Mercosur to include sensitive products, among them sugar, during the next round of trade talks between 4 and 10 December.

The Commission risks once again failing to maintain a firm line on sugar in its trade negotiations. EU sugar beet growers, sugar producers, and workers stand determined: we will not pay for the offensive interests of other industrial sectors or for those of the Brazilian state-supported sugar-ethanol regime.

CIBE President Bernhard Conzen explained: “the European Commission is actually asking beet growers and processors to make sacrifices for Brazilian interests, which is totally unacceptable. Ever higher standards for ever lower prices for us, and ultimately importing lower standards, is incomprehensible and a nonsense for farmers. This must stop or we are heading for a major and very painful crisis.”

Further opening of the EU sugar market would be to the severe detriment of the EU beet sugar sector and would imperil many of the 140,000 farmers, 30,000 employees, and hundreds of rural communities whose livelihoods depend on the sector. It would undermine the sustainability and dynamics of the sector at a time of unprecedented uncertainty following the end of production quotas from 1 October 2017. The risk of further factory closures is high, warned CEFS President Johann Marihart and EFFAT Secretary General Harald Wiedenhofer. This would have serious consequences for the vulnerable rural areas supported by the industrial jobs and high-quality employment that beet sugar production provides.

“There is no level playing field between the EU and Brazil; the Commission continues to dream that our sector is able to handle further opening up of the market without consequences, and continues to hide from reality: this is irresponsible” noted Johann Marihart, adding: “The Commission might as well tell us which factories in the EU would have to close.”

“The European sugar sector delivers safe, quality jobs. It is crystal clear that the sector would be a loser in that deal. The employment impact could be devastating. Is this the future workforce strategy of Europe after the promises of the Gothenburg Social Summit?” asked Mr. Harald Wiedenhofer.

Copa and Cogeca Secretary General Pekka Pesonen concluded: “We need fair and balanced trade agreements that ensure that we do not have surpluses on our market. EU farmers and their cooperatives should not be penalized when the EU negotiates free trade deals. They cannot afford additional income losses resulting from a trade deal which puts more pressure on the EU sugar, ethanol and beef markets in a trade deal. In the sugar and ethanol sectors, there is no level playing field with the Mercosur countries which have developed sophisticated domestic support schemes. We are already a major net importer of agricultural produce from these countries and by increasing their access to our market, there would be a further risk of deforestation in these countries at the expense of the climate. We urge the Commission to show determination and leadership in these negotiations. We call on Member States not to make another blow to the EU agriculture sector which is vital for the economies of our rural areas.”

At their annual Technical and Reception Control Committee today in Chantilly, France, European beet growers discussed various issues related to growing, harvesting and delivering beet to the sugar factory. Fundamental changes are at work with the end of quotas and with the possibilities of using of plant protection products that deeply impact the way farmers grow and deliver their beet.

Longer campaign, flat rate crown system, reception of whole beet have been debated between beet growers from the EU and Switzerland. Jean Pierre Dubray, Chair of this Committee, stressed that “beet growers have always been in favour of modernization and simplification of beet delivery, but under the condition that the risks and benefits be equitably shared between growers and processors and we note that this balance is not there in many regions. Furthermore, the profound changes that are taking place put more pressure on growers and necessitate more than ever an increased technical competence and close monitoring throughout the long beet season, from seedbed preparation via sowing and growing to the storage and delivery of beet.”

The extremely challenging context with regards to plant protection products was also extensively discussed. European growers cannot but note that sustainable practices are today challenged or banned, and innovation restricted. Over the past two decades, many plant protection products have been withdrawn, and good farming practices have already developed considerably in beet growing in the EU. However, today ideological positions prevail. “This is all the more incomprehensible for our sector, whose strength comes from its high sustainability” added Jean-Pierre Dubray.

“We sound the alarm to the EU Institutions and to the Member States because hasty and unjustified decisions with regards to plant protection products, in particular on glyphosate and  neonicotinoids used in pelleted beet seed, would set us back 20 years with unsustainable practices and would jeopardize the sustainability of our sector to the benefit of imported sugar from third countries”. “European beet growers remain committed to further improve their productivity and to work with the Institutions to further develop their good practices, under the condition that they are given the means to do so”, concluded Jean-Pierre Dubray.


CIBE CALL TO THE AGRI COUNCIL

European sugar beet growers consider that sugar market access concessions to Mercosur, Mexico and Australia should be excluded for the following reasons:

We urge the EU Institutions to stop considering the EU beet sugar sector as a bargaining chip in all the EU’s trade negotiations and to assess the overall consequences of the current stance on sugar by the EU Commission in its negotiating strategy.

Brussels, 24 October 2017 – The European Parliament Environment Committee’s vote to   phase-out  the use of  biofuels by 2030 seriously undermines the EU’s climate and sustainability objectives. It diverges sharply from the latest draft proposal from the EU Council, which safeguards the role of  biofuels in the renewable energy framework.

Ahead of the vote in the Environment  Committee, the Green Rapporteur MEP Eickhout highlighted that the “beneficiary” of the recast of the Renewable Energy Directive  (RED II) “should be the climate”. But  his proposal falls short of ambition in this sense, since it does not include a dedicated target for the use of renewable energy in the transport sector and calls for a  phase out of  biofuels, which are essential in agricultural sustainability and represent the most cost-effective and readily available solution to decarbonise the transport sector. Beyond that, it prevents the potential of valorisation of EU agricultaralbiomass.

Speaking on behalf of the eight associations representing the EU Biofuel Chain, Copa and Cogeca Secretary-General Pekka Pesonen  stated: “The EU should create a policy framework which supports all sustainable forms of renewable energy and contributes to the reduction of fossil fuels’ use and protein feed imports. EU  biofuels have proven to do all that. ”.

In particular, the development of crop-based biofuels has resulted in some 35 Mt of gross avoided CO2 emissions in 2013. The deployment of renewable energies in transport led to a 116 Mtoe drop in EU demand for fossil fuels and, more importantly for the EU’s security of supply, to savings of €30 billion per year thanks to avoided imported fuel costs. Moreover, the production of  biofuels from arable crops triggers the co-production of high-value protein meal and other animal feed which replace 4 to 5 million hectares of imported feedstock. This increases the EU protein self-sufficiency and avoids environmental impacts elsewhere.

All these benefits, however, have been disregarded in the Environment  Committee’s vote to the advantage of the fossil fuel industry. As declared by Nathalie Lecocq, Director General of FEDIOL : “The Environment Committee has focused all its efforts in trying to get rid of  biofuels on the basis of alleged sustainability risks. In doing so, it has completely overlooked the big picture, which is the fact that 95% of EU road transport  still relyies on fossil fuels”.

In this regard, while welcoming the enhanced focus on new  technology biofuels  proposed in the Environment Committee’s  opinion, the EU Biofuel Chain regrets the adopted approach which opts to further develop an  industry at the expense of the existing one. It is essential for the EU to recognise the role of the  biofuels industry in the development of new technology  biofuels: enabling long-term investments in them  will require the involvement of the investors of crop-based  biofuels

24/10/2017
CIBE-CEFS FACT SHEET: MOLASSES AS A FEEDSTOCK FOR APPLICATIONS FROM FEED TO ENERGY


Ahead of the vote in EP Committee for Agriculture and EP Committee of Environment on the proposal for a directive of the European Parliament and of the Council on the promotion of the use of energy from renewable sources, CIBE and CEFS would like to react to the arguments of molasses users, notably by the chemical industry, which have been lobbying hard to convince MEPS that there is and there will be a supply issue if beet molasses is used to produce biofuels. This is absolutely not true and there is no evidence for such misinformation.


CIBE welcomes the initiative by Commissioner P. Hogan to set up a Sugar Market Observatory. Ahead of the observatory’s kick-off meeting, CIBE would like to reiterate its position regarding the transparency on the EU sugar market post-2017. Click here to download the position. 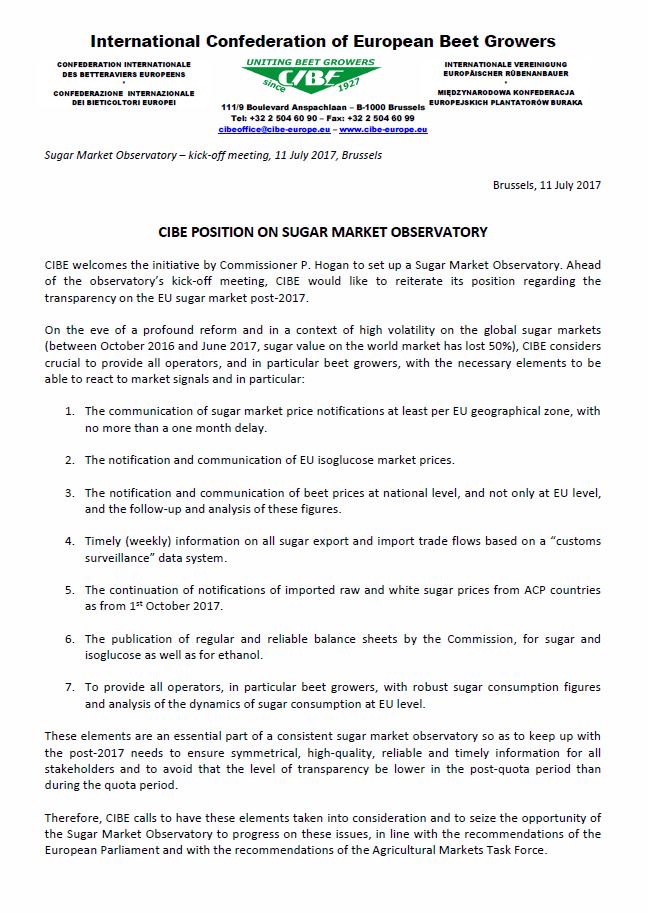 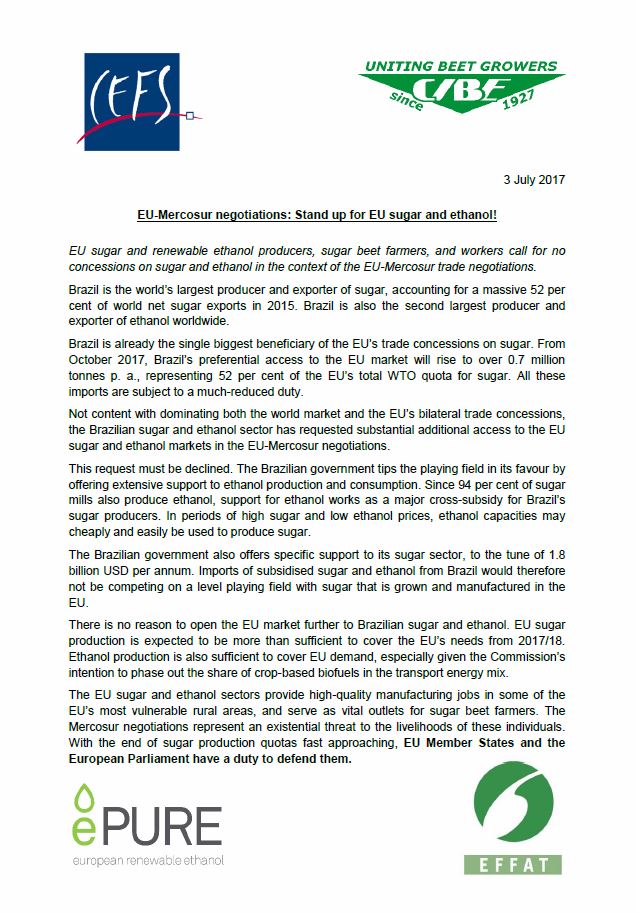